‘It's like an open prison’: the catastrophe of converting office blocks to homes

A policy designed to open up the planning system has left thousands in tiny flats, far from schools and shops. And with more deregulation coming, things will get worse 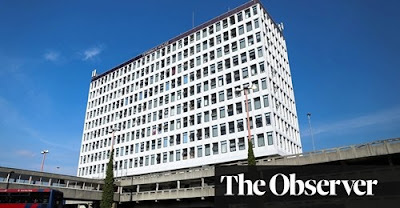 "Shield House is just one example of “permitted development”. It is an outcome of a government experiment in deregulation, which allows homes to be made out of old offices and shops without planning permission, that has been going on for some years. An estimated 65,000 flats have been made in this way. The experiment has been catastrophic in several significant respects, but the government has recently decided to double down on it, expanding their policy such that office blocks may now be replaced with entirely new buildings without permission. This means that undersized and badly planned and located flats can now be realised at a larger scale.
(..) Permitted development means local authorities and local residents cannot oppose or alter proposals. They have no power to insist on adequate room sizes or daylight or influence the look of a building. With these safeguards removed, predictable consequences followed. There was a race to the bottom on size, with some flats created of 20, of 15, or even 10 square metres (a standard parking space is 11.5 square metres) in which a bed might end up 30cm from a washing machine. Such things as balconies or gardens would become virtually extinct.
(..) The main role of permitted development was once to ease the path of conservatories, small domestic extensions, garden sheds, and other uncontroversial works. But over the past few years the government (in England only, as the other nations of the union have devolved planning regimes) has turned it into a machine for driving up housing numbers, no matter how drastic the effects on people’s lives.
(..) In three reports in 2011 and 2012 the rightwing thinktank Policy Exchange had a prolonged lightbulb moment. What, they asked, if permitted development rights were extended, so that they would allow worn-out office buildings to be converted into housing, without the need for full planning permission? Since seeking planning permission can be an inefficient, expensive, risky and sometimes capricious process, there were attractions to the idea. Why not cut red tape and unleash the power of a deregulated market, to release a plentiful supply of residential units that would be relatively cheap, whether or not they were especially cheerful? “No one is going to mind if an office becomes a home,” said Policy Exchange. “We need to systematically change the planning system. Our current planning system, designed as part of a socialist utopia in the 1940s, has to be modernised for a 21st-century economy.”
(..) Lockdown has highlighted the importance of adequate domestic space and access to the outdoors. Covid-19 has also changed patterns of work, with the likelihood that demand for offices will in some places decline. There will be an opportunity to make them into homes, but it will take thoughtfulness and planning to do it well. There seems to be no chance of either from the government. Instead we hear this from Jenrick: “These changes will help transform boarded-up, unused buildings safely into high-quality homes at the heart of their communities.” But the buildings are not always unused, the homes are not high-quality and they are not in any positive sense at the heart of communities.(..)