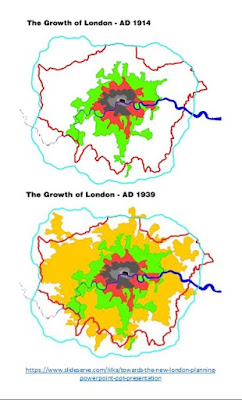 (excerto)
(..) The precise impact of this sort of development upon the urban structure can be well seen by comparing the maps of London, in 1914 and 1939 (..). London in 1914, as we already noted, had he characteristically tentacular shape associated with the early public transport city – the city of the steam train and the horse bus. By 1939 London had assumed a completely different shape: growth was much more even in any direction, producing a roughly circular city with a radius about 12-15 miles (19-24 km) from the centre. The basic reason for this was a change in the technology of transportation. First, electric trains were more efficient carriers than the steam trains had been: accelerating and decelerating rapidly, they could serve more frequently spaced stations. Secondly, and even more importantly, the motor bus allowed a fairly rapid urban-transport service to penetrate in any direction from these stations, along existing roads, without the need for elaborate capital investment on the part of the operator; it therefore served as a highly efficient feeder service. These changes altered the pattern of accessibility within the urban area. The isochrones (lines of equal accessibility to the centre, in terms of time) were in 1914 very irregular; they fingered out a long way along the rail lines. By 1939 they had become more even and circular (or concentric) in form; and the development of the urban area followed accordingly. This form we can call typical of the later public transport city; it was not at all a creation of the private car, since in London by 1939 only about one family in ten owned owned one. (..)