Le Havre is celebrating its 500th anniversary, but its architectural gems are modern masterpieces built from the ashes of war – and now a world heritage site


Few cities make you want to stroke their walls, but in Le Havre it’s hard to resist caressing the concrete. All but obliterated by allied bombing in the second world war, France’s second-largest port city was entirely rebuilt according to the meticulous vision of Auguste Perret, supreme master of liquid stone and tutor of Le Corbusier.

It is a place where concrete is treated with the care and attention usually given to fine timber panelling, where joints between columns and beams are expressed with the precision of carpentry, where surfaces are variously polished, bush-hammered, washed and brushed, creating tactile textures that range from gnarled rock face to lustrous velvet. Anyone yet to be convinced that concrete can be beautiful might find a weekend in Le Havre does the trick.

Celebrating its 500th anniversary this year, Le Havre is promoting itself as something of an architectural hotspot, home not only to Perret’s celebrated master plan, but also as home to one of the few European projects by the great Brazilian architect Oscar Niemeyer in the form of Le Volcan, a swooping white volcano-shaped theatre, nicknamed the “yoghurt pot”. There are a clutch of other recent buildings in the docklands too, including a fun swimming pool and spa, Les Bains des Docks, by Jean Nouvel (only skin-tight trunks or Speedos allowed), a brooding black wedge of a naval college, and some rather grim student flats in shipping containers – the usual mixed bag of waterfront regeneration, which only serves to throw the elegance of the town centre into relief. 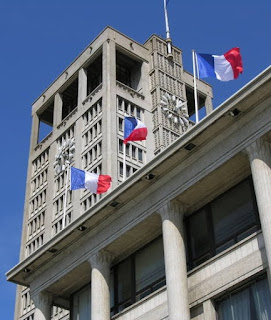 As one of the few modern sites to be given Unesco status, the 130-hectare centre of Le Havre stands as a hymn to the mid 20th-century faith in modular construction and prefabrication. It is a serene place of broad avenues lined with slender colonnades of tapering columns, supporting finely proportioned blocks of apartments above, in shades of cream, terracotta and ochre. Look closely and you’ll spot the attention to detail, like the faceted geometric column capitals which vary from street to street, and the careful concrete panelling – echoing skirting boards, dado rails and wainscoting – that lines the buildings’ entrances. (Continua)