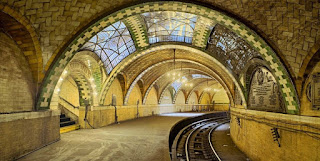 (..) The forgotten City Hall Station was the original terminal of New York's subway system. It opened on the evening of October 27, 1904, along with 27 other Interborough Rapid Transit (I.R.T.) stations up to 145th Street on the west side. The inauguration began with a private ride conducted by Mayor George McClellan and ended with a fascinated public standing in awe of the strange new technology.

(..) Even in its day the City Hall station stood out as unique. Tickets were purchased from an oak ticket booth on a mezzanine level above the platform. Glass skylights let sunshine onto the platform during the day, and wrought-iron chandeliers lighted it at night. The walls of the station were decorated with tall beige and emerald tiles. The train passed beneath arched ceilings designed by curve-loving architect  Rafael Gustavino.

(..) The track itself looped at a radius of roughly 147 feet beneath the express tracks to the uptown platform of the Brooklyn Bridge station. Ultimately this distinctive curve proved the City Hall station's undoing. By mid-century, as it became apparent the system needed longer trains to keep up with ridership, officials realized the City Hall platform wouldn't accommodate them without being lengthened. Given the difficulty of this reconstruction — as well as the low station traffic of only 600 passengers a day — the city retired the station at the end of 1945. (Continua)